‘Ahead of their time’ is a much used phrase to describe some of the most creative groups and The Sisters Love were most definitely that. In 1980 New York DJ Danny Krivit released an extended eight-minute cut-up of a track called "Give Me Your Love" by The Sisters Love. Already an underground disco classic (partly on account of its rarity), this release brought it to a new audience of disco and rare groove fans. Twenty years on and Soul Jazz Records 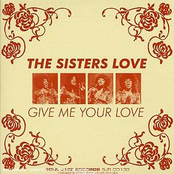 Give Me Your Love