Tommy Johnson (1896 – November 1, 1956) was an influential American delta blues musician, who recorded in the late 1920s, and was known for his eerie falsetto voice and intricate guitar playing. Johnson was born near Terry, Mississippi, and moved around 1910 to Crystal Springs where he lived for most of his life. He learned to play the guitar and, by 1914, was supplementing his income by playing at local parties with his brothers Major and LeDell. 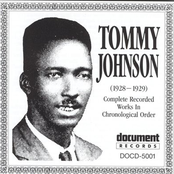