Washington, D.C. bassist and vocalist Tyrone Brunson played and sang in area bands through the '70s. He was signed to the Columbia-distributed Believe in a Dream label after some demos he'd submitted impressed CBS executives in 1982. His first single, the instrumental "The Smurf", tapped into what was then a New York dance craze, and the song won international club recognition. But when the smurf trend cooled, so did Brunson. While "The Smurf" reached number 14 on the R&B charts in 1982, the follow-up, "Sticky Situation," stalled at #25. 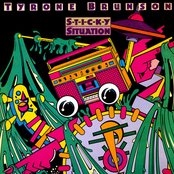