Known for its trashy, soft-porn image and sexually exploitative lyrics, Vanity 6 was a short-lived female vocal trio that came out of Prince's funk-rock empire in 1982. Vanity 6 was formed in Prince's hometown of Minneapolis, where singer/actress Vanity (whose real name is Denise Matthews) got together with fellow singers Brenda Bennett (a native of Boston) and Susan Moonsie. Supposedly backed by The Time although Prince actually performed all the music himself, Vanity 6 recorded its self-titled debut album for Warner Bros. 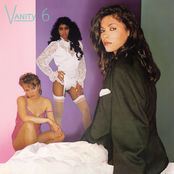