(from Wikipedia) The Vital Tech Tones were an American fusion supergroup formed in the mid-1990s. It was composed of Vital Information drummer Steve Smith, Tribal Tech guitarist Scott Henderson, and Béla Fleck and the Flecktones bassist Victor Wooten. The group released two albums before breaking up due to time constraints (the band was a side project for all three members). There is still some talk of a future reunion, but no official announcement has been made. 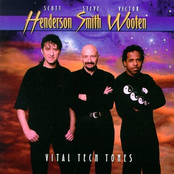