Wagner Silva de Souza (born 11 June 1984 in Rio de Janeiro, Brazil), commonly known as Wagner Love, is a Brazilian football striker who plays for Flamengo. A talented forward who has been described by World Soccer Magazine as possessing "mobility, flair, awareness and powerful shooting." He was then bought by CSKA Moscow.In the summer of 2004, prior to their Champions League campaign. For over a year after his arrival at CSKA Moscow, rumours kept appearing that he did not want to stay in Moscow 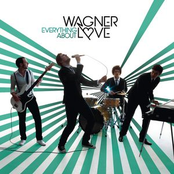