Flea, the bass player for the Red Hot Chili Peppers, said this about Weapon of Choice: “Lonnie's one of the funkiest bass players alive today - I've totally copped stuff off him...” (source: Bassplayer Magazine). Stone Gossard, the guitarist for Pearl Jam, who originally signed Weapon of Choice to Sony550, has this to say: “I signed this band first and foremost because of their musicianship and stage personality, they're the kind of band that likes to tour to break down barriers, so nothing's going to stop them.” 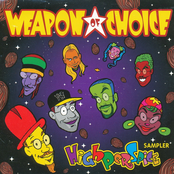