There are at least 2 bands with this name. Xtra, the Italian jazz/rock fusion group that released their eponymous debut in 1994 on the Playgame Music label. + Xtra, the band that time and taste forgot, a Scottish disco outfit that wowed audiences in Scotland and France in the mid-1990s with their toe-tapping tunes and wacky dance routines. And the lovely Auntie Mabel, whose role it was to read Cosmopolitan on stage and smoke black Sobrani's. Those were the days. 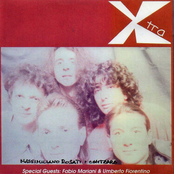